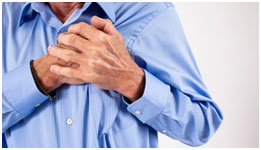 The myocardial infarct, also called heart attack, corresponds to the partial destruction of the heart muscle. This is an extremely urgent situation, needing to call Immediately the emergency service (in France: the SAMU).

How is the myocardial infarct triggered off

By the blockage in an artery, which is supplying the heart with blood, and therefore
with oxygen (coronary artery). The absence of oxygen creates problems of the contraction of the heart muscle (myocardial), which manifest itself by troubles of rhythm, cardiac insufficiency, if not heart failure.

Which are the symptoms of a myocardial infarct ?

The infarct is sometimes diagnosed even subsequently to complications appearing, not necessarily associated with pain and sometimes even misleading because of coming silently or without the typical signals for alert: one only gesture: call the emergency service, alert the SAMU, which can detect by confirmed electrocardiogram diagnosis ischaemia

Which are the risk factors of a myocardial infarct ?

Among the most well-known risk factors and to which our lungs react directly in order to avoid the formation of atheromatous plaques are :

Risk factors which cannot be changed :

The risk of having an infarct, 1st reason for death for a woman after the menopause, lhas considerably increased for young women because of tobacco consumption, overweight and stress.

2nd reason for the death of men.

Which are the treatments for a myocardial infarct?

In view of this urgency, the patient is as quickly as possible to the interventional cardiology unit. If the time between the beginnings of the symptoms and the hospitalization of the patient is more than 90 minutes, the patient is administered a thrombolytique agent in order to dissolve the blood clot which blocks the coronary artery, open in the case of a myocardial infarct.

When the delay of 90 minutes is respected, an angioplasty is administered. This will be done with a little inflatable membrane, used in order to re-establish the diameter of the coronary artery by pushing the plaques back into the interior of it. The angioplasty is very often completed by setting a stent.