The prototype of the first artificial heart. 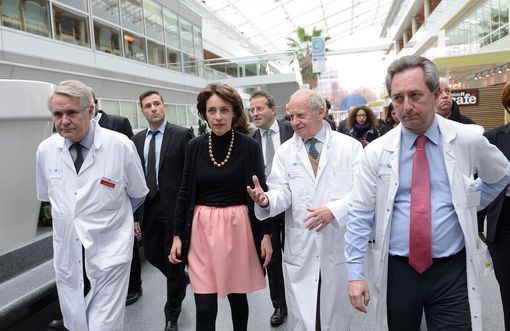 It is with pride, the pride of those who seek and find that on December 21, 2013Professors Carpentier, Latrémouille, Fabiani and the entire healthcare team welcomed to the cardiovascular surgery department of the Georges Pompidou hospital  Marisol Touraine, Minister of Health, accompanied by Martin Hirsch, Director of the Public Hospitals of Paris Organisation. Well-deserved honours, together with a message from the head of state, for a team that has taken a rare gamble in heart surgery, led by an extraordinary man : Professor Alain Carpentier. . As a surgeon with golden hands, worthy of the Nobel prize for Medicine according to his admirers, this exceptional man has been fighting since the late 60s so that our hearts should not stop beating. Alain Carpentier is convinced that that the great battle to be fought is in the field of research, and he has always been active in developing innovation. Using valves made from animal tissues, from the first generation of artificial hearts through to this little gem of technology which has the physiology of a normal heart with ventricles and which beats time to the rhythm of the emotions, Alain Carpentier had, has and will continue to have a compelling interest in the human heart.

Beyond this exceptional achievement, this artificial heart is a collective success, the ultimate combination of science and industry, without which this prototype would not have emerged. Virtually implanted as a test on the scanners of 120 patients, Professor Carpentier’s artificial heart needed an operation lasting over ten hours, orchestrated by Professors Duveau and Latrémouille and other experts in cardiac surgery. At the age of 75, the patient, who was suffering from irreversible heart failure, reported that he was feeling well and with a disarming laugh asked for an “alleviated” Coca, because this man with a strong character and a sturdy sense of humour dislikes the anglicism “light”. This was an exceptional encounter between a patient like no other and a surgeon-scientist of genius, who preferred not to be present during the operation. “Too many emotions,” he confided to reporters. This has been as much a human achievement as a technological conquest, the financial cost of which Professor Carpentier wanted to see based on egalitarian principles, so that eventually it will be possible to implant millions of artificial hearts without discrimination

An exploit whose success brings joy to Danièle Hermann, who was operated on twice by Professor Carpentier, and who organized numerous events to promote and fund some of his research work.

Long live the heart Made in France !