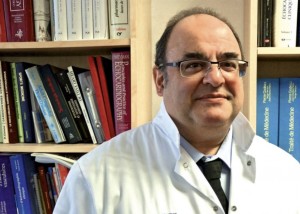 The thirteenth Prix Danièle Hermann award ceremony took place in beautiful spring sunshine, attended by numerous leading lights from the scientific community at the Palais de l’Institut de France on Tuesday April 4th 2017. This prize is awarded to a research proposal in the cardiovascular health field.

This year, this highly-prestigious award was presented to Professeur Albert Hagège, Head of the Cardiology Department at the Hôpital Européen Georges Pompidou hospital in recognition of his research into, heart failure, especially where this is linked to inherited disorders of the heart muscle and mitral valve. It was the perfect occasion for attendees, who included amongst their number Madame Elisabeth Depardieu and Monsieur and Madame Laurent Dassault, to pay tribute to the strenuous efforts that Danièle Hermann (who is sorely-missed by all of us) put into promoting more research into women’s cardiovascular health throughout her life.

This commitment was the focus of a speech by Gabriel de Broglie, Chancellor of the Institut de France, who made a moving reference to Jean de La Fontaine (‘La plus belle victoire est de vaincre son cœur’ – the finest victory is to conquer one’s own heart). Catherine Llorens-Cortes, President of the Scientific Advisory Board and winner of the Prix Danièle Hermann in 2012, painted an accessible, lively portrait of the career of the clinician-scientist and now prize-winner. Lastly, Professeur Albert Hagège gave a humorous presentation of how he was able to bridge the gap between basic and clinical research. He paid particular attention to his role in the discovery of genes linked to inherited cardiomyopathy, as well as the first genes to be identified as being responsible for mitral valve prolapse. This multi-disciplinary, patient-focused research is very much in line with Danièle Hermann’s vision. Maître Michèle Cahen, Vice-President of the Fondation Recherche Cardio-Vasculaire had the pleasure of awarding Professeur Albert Hagège the prize, which comes with a 30,000 euro grant. She reminded the audience that research was an amazing gift that was all about extending patients’ lives.

This, the thirteenth such award ceremony, was an occasion for both sober remembrance and real joy, testament to how the prix Danièle Hermann is both a not-to-be-missed event and something of a beacon of hope in the field of cardiovascular research.

Click on the links below to download (in french) the award ceremony press pack and press release:

Some photographs of the award ceremony: 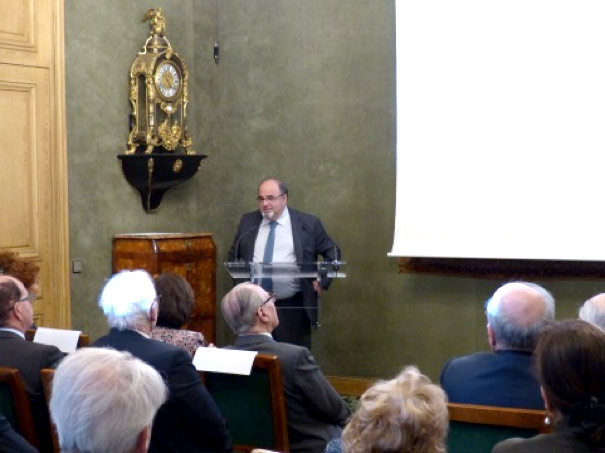 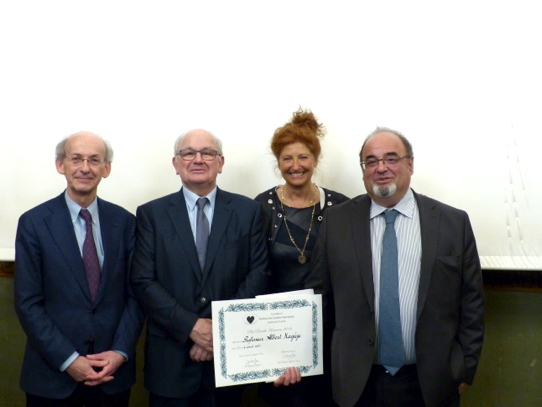 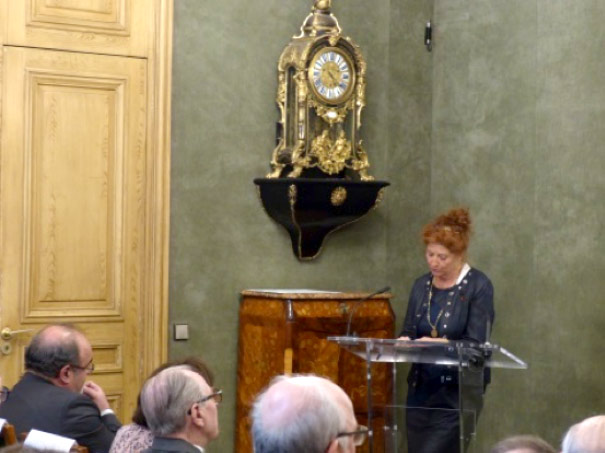 Docteur Catherine Llorens-Cortes, President of the Scientific Advisory Board and winner of the Prix Danièle Hermann 2012